I am delighted to announce the program for the LHRT Research Forum on “Libraries and Frontiers”.  Please join us for what promises to be a fascinating and enlightening conversation.
Eric Novotny, LHRT Vice-chair/Chair -Elect.  ecn1@psu.edu

MADE MARIAN: Real Librarians of the California Coast
Dr. Lisa Blank compares the “typical” librarian as portrayed in the contemporary and historical literature with the real experiences of early California librarians.  Examining the lives of the women and girls who worked in or took the library training class at the Redondo Beach Public Library between 1895 and 1924  she challenges traditional views of our profession and uncovers the real face of California librarianship before 1920.

Along the Wilderness Road: Social Libraries on the Virginia Frontier
Yvonne Carignan looks at more than fifty social libraries founded in Virginia before the Civil 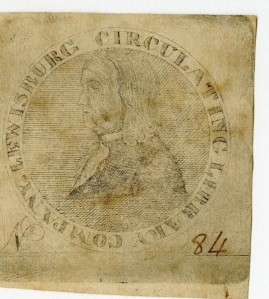 War.  Her research challenges previous assumptions about social library history with findings about Virginia’s early library founders, and the role of religion and other value systems in determining the prevalence of libraries  on Virginia’s frontier compared to the established east.

Bookplate from the Lewisburg (Greenbrier County) Circulating Library Company, founded 1824.  Presumably, this is an image of Benjamin Franklin, for whom at least two antebellum social libraries in Virginia were named. 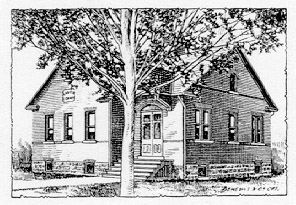 While Michigan is not traditionally thought of as the “frontier” –  in the 19th Century road and train access to some small villages was still poor.  Carole Nowicke and Sharon Carlson look at the role played by ladies’ library associations in small cities and rural villages in Michigan. They explore what needs the LLA helped rural women meet, and examines questions including; What did these women read? What were the library’s holdings? and how did LLAs in rural areas compare to the social clubs of upper middle class city women?

Dr. Lisa Blank received her PhD in History from UCLA in 1982. Librarianship being famously a second career her previous work experience includes, but is not limited to, 1.5 years as a visiting assistant professor of history, 3.5 years in the US Foreign Service, six years as a contracts and computer analyst for the UCLA Medical Center, and 15 years as an independent bookkeeper. She retired at the close of 2011, and finally, after seven full years, completed her MLIS from SJSU in 2013.

Yvonne Carignan, has been head of George Mason University Libraries’ Special Collections & Archives since 2011.  Previous positions have included library director and head of collections for the Kiplinger Research Library, Historical Society of Washington, DC; and head of the preservation program for the University of Maryland Libraries. Her education includes a Masters in history from GMU, a Masters in Library Science from UNC, and a BA in history from VCU.

Dr. Carole Nowicke is a reference librarian and research associate for the Indiana Prevention Resource Center in the Department of Applied Health Science at Indiana University. She is also employed by American Public University of Charlestown, West Virginia as a reference librarian and subject specialist in Public Health, Sports Medicine and Sports Management. She holds a Ph.D. from Indiana University in Library and Information Science and American Studies, an M.L.S. from the University of Maryland, and a B.A. from Western Michigan University.  Her dissertation “Not Built by Jack But by You and Me: The Schoolcraft Ladies’ Library Association, 1879-1920: A Study of Women’s Reading Culture in Rural Southwestern Michigan,” has been cited in such varied disciplines as library history, women’s history and agricultural history. She served as Historian of the International Tuba-Euphonium Association (ITEA) for a number of years and conducted oral histories with many of the “grand old men” of the tuba and euphonium. In such spare time as she has, she enjoys dancing with the Caravansarai Belly Dance Troupe.

This site uses Akismet to reduce spam. Learn how your comment data is processed.